Good Smile Digs Up a Shovel Knight Nendoroid Next Article

PREVIEWS Prevue: 'Best Of 2000 AD' Is Precision-Engineered To Thrill! 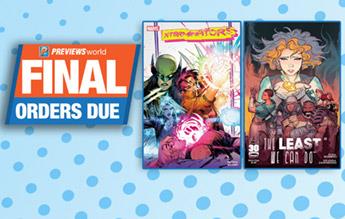 It's your last chance to guarantee a pre-order for these comics, graphic novels, and toys at your local comic shop. Make sure to get your orders in by August 22!

Power Up with These PREVIEWS Exclusive Power Rangers Collectibles
Aug 19, 2022

Sneak PREVIEWS: BOOM! Studios Finds Love at the End of the World
Aug 19, 2022