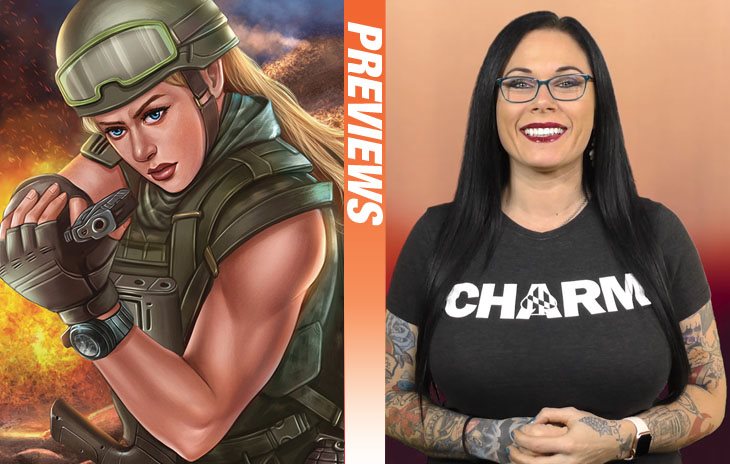 Indie Edge: Monsters, Militias, Millionaires, And More! Jan 23, 2020 The "indie" umbrella can be wide, and these comics cover a lot of different story types and styles, but you can find just about any comic you've ever wanted and maybe a few you never knew you needed.
Features

Mike Allred Takes You On An Interdimensional Trip with X-Ray Robot
Jan 22, 2020

Mike Allred talks with PREVIEWSworld about his new miniseries X-Ray Robot and the strange, wild trip it will take you on!

PREVIEWSworld gives you your first look at the official list of products coming to your local comic shop on January 29th! Among the titles is Image Comics' Protector #1, and much more!

PREVIEWSworld gives you your first look at the Premier Publisher titles coming to your local comic shop on February 5th. Titles include Star Wars: Darth Vader #1 from Marvel Comics, and more!

PREVIEWSworld ToyChest has your official release list of toys and other pop-culture merchandise on sale January 29th at your local comic shop!

We've got a roundup of exclusively new manga series headed your way this spring, from fabulous publishers including Viz Media, Kodansha, Seven Seas Entertainment and more!

Check out all of the NEW trade paperbacks and graphic novels that are available at your local comic shop on 1/22. Titles include Birds of Prey: Harley Quinn TP, Valkyrie: Jane Foster TP, Stranger Things: Zombie Boys TP, and more!

Looking for a new series to jump into? Here are five new comics with fresh starting points you can read this week!

Every week PREVIEWSworld calls attention to those comics, graphic novels, and toys which stand out from all the rest. These titles can be found at your local comic shop on January 22nd!

This month, we pay tribute to comics’ great artists via collected editions, how-to’s and best of volumes dedicated to their works!

Superman's confrontation with Dr. Manhattan changes the DC Universe forever in Geoff Johns and Gary Frank's Doomsday Clock #12 from DC, the final issue of the best-selling series and the best-selling comic book of December. See the Top 100 now!

Marvel Comics' House of X/Powers of X, a hardcover collection of the two mini-series by Jonathan Hickman, Pepe Larraz, and R.B. Silva, was the best-selling graphic novel of December. See the Top 100 now!

They're the children of the atom! Brought together to defend a world the fears and hates them. I'm talking about those Uncanny X-Men, of course.

Ani-Mia and her rotating guest of comic fans, comic professionals, and the comic book curious sit down to discuss Batman Hush.

Wes Craig talks about his collaborative process with Rick Remender, his creative inspirations, and shows us how he masters the deadly art of Deadly Class.

See the big books from our Premier Publishers in the October PREVIEWS! Get ready for new titles from BOOM! Studios, Dark Horse, DC, Dynamite, IDW, Image, and Marvel!

Johnson Previews the Year Ahead for Titan's Blade Runner
Jan 14, 2020

Blade Runner co-writer Mike Johnson talks with PREVIEWSworld about the second arc of the Titan comic series and the FCBD one shot coming in May!

Jason Aaron and John Cassaday's Star Wars #1 from Marvel Comics was the best-selling comic book of the 2010s. See the Top 100 of the past decade now!

Robert Kirkman's The Walking Dead Volume 1, the first volume of his zombie series published by Image Comics and the inspiration for the hit television series, was the best-selling graphic novel of the decade.

Diamond Select Toys' Marvel Select Deadpool Action Figure, was the best-selling toy product of the 2010s. See the Top 100 of the past decade now!

Writer-artist Adam Warren was at the forefront of the American manga wave before it was cool. In Part 1 of this career retrospective, find out how the creator behind EMPOWERED helped introduce manga to the U.S.

The January PREVIEWS catalog is full of great comics for young readers. This month you can preorder titles like Sonic, Avatar, Spider-Man/Venom, Casper, and more!

With the 2010s officially in the books, we're taking a look back at some of most memorable and impactful books of the past decade along with a few honorable mentions we think you should read.

Inside January's PREVIEWS: Transformers vs. Terminators, Mandalorian, And More!
Jan 03, 2020

These six stellar titles may have passed you by in 2019, but here's one more chance to discover what you missed.

Comic Books in 2020: 15 Exciting Things To Look Out For! Here's what the internet is already buzzing about ahead of the new year.

With all the new comics coming to shops this week it can be overwhelming to choose what to read. Here are five new comics with fresh jumping on points you can read this week. Just start here.

The world of small press comics is vast and ever-evolving. Indie Edge is here to help you can find the perfect comic for those of you with fringe tastes.

For Sherlock, there was only ever one woman - now Irene Adler is on a mission to take down Moriarty! It's the League of Extraordinary Gentlewomen, as Adler teams up with a host of famous female faces from science, history and literature to defeat the greatest criminal mastermind of all time!