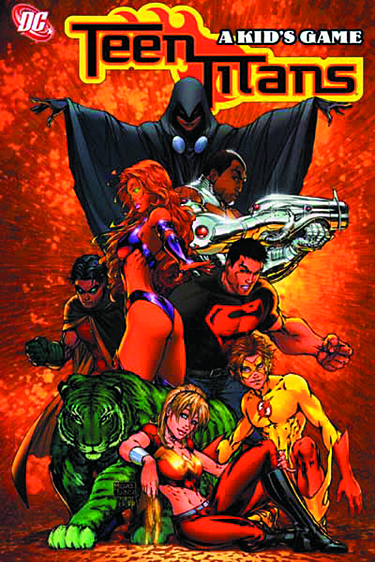 Witness the dawn of a new era in TEEN TITANS: A KID'S GAME, a 192-page trade paperback collecting the best-selling TEEN TITANS #1-7, written by the fan-favorite Geoff Johns with art by Mike McKone and Marlo Alquiza, additional art by Tom Grummett, Nelson DeCastro and Kevin Conrad, and a cover by Michael Turner!

Witness the gathering of a new team of Teen Titans and their initial battle against an old, familiar foe: Deathstroke! The reasons behind his actions prove shocking to the team, and before the teen heroes can even get their feet on the ground, they must reencounter the cult of Brother Blood. Plus, an introduction by Johns and Profile Pages from TEEN TITANS/OUTSIDERS SECRET FILES #1!
In Shops: N/A
SRP: $16.99
View All Items In This Series
ORDER WISH LIST