#
OCT192099
(W) Tyler NINJA Blevins, Justin Jordan (A) Felipe Magana
The first in a series of original graphic novels, starring Ninja (Tyler Blevins), the most influential public figure in gaming today, as he embarks on exciting gaming adventures, with the fate of the world at stake. Tyler Blevins (aka "Ninja") enjoys a captivated audience of millions as he does what he loves: decimating the competition. At the end of one fateful stream, however, Ninja receives a strange email with a link to an impossibly realistic, challenging, and addictive game that simultaneously explodes in popularity. As the best player in the world, Ninja's unable to resist a challenge and soon discovers that there's more to this game than meets the eye. Teleported into the battle royale's universe, a digitized Ninja must start from scratch, finding a way to win the game-and save the world. Along the way, he meets valuable friends and ultimately fulfills a destiny larger than he ever could have imagined!
In Shops: Dec 04, 2019
SRP: $16.99
View All Items In This Series 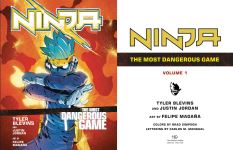 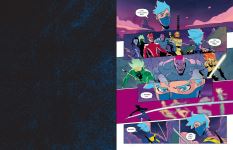