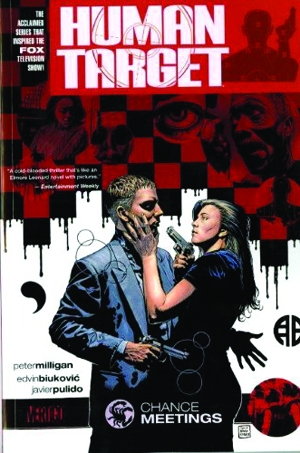 OCT090298
(W) Peter Milligan (A) Edvin Biukovic, Javier Pulido (CA) Tim Bradstreet
Collecting the Vertigo title that inspired the upcoming Fox TV series! Christopher Chance makes his living by turning himself into a human target. A master of disguise, he cunningly takes on the appearance and persona of men and women with contracts out against them. But when a routine assignment to impersonate an African-American minister with a bounty on his head goes south, Chance finds himself caught between a lethal assassin and a vicious gang war. After the assignment changes his life completely, Chance's next adventure takes him into the world of Hollywood as he impersonates an aging actor to find a missing boy and flirts with the idea of leaving his dangerous life behind him.