NOV180514
(W) Brian Michael Bendis (A/CA) Michael Avon Oeming
Well that happened! The world has been ripped apart by mob enforcer Jagger Rose's actions last issue, and the fallout is like nothing anyone has ever seen! In a world where the mob's influence is both huge and public, the battle between organized crime and the United States government has reached its tipping point. It's another barn-burning issue by the award-winning creators of POWERS, Brian Michael Bendis and Michael Avon Oeming.
In Shops: Jan 09, 2019
SRP: $3.99
View All Items In This Series 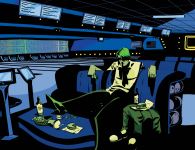