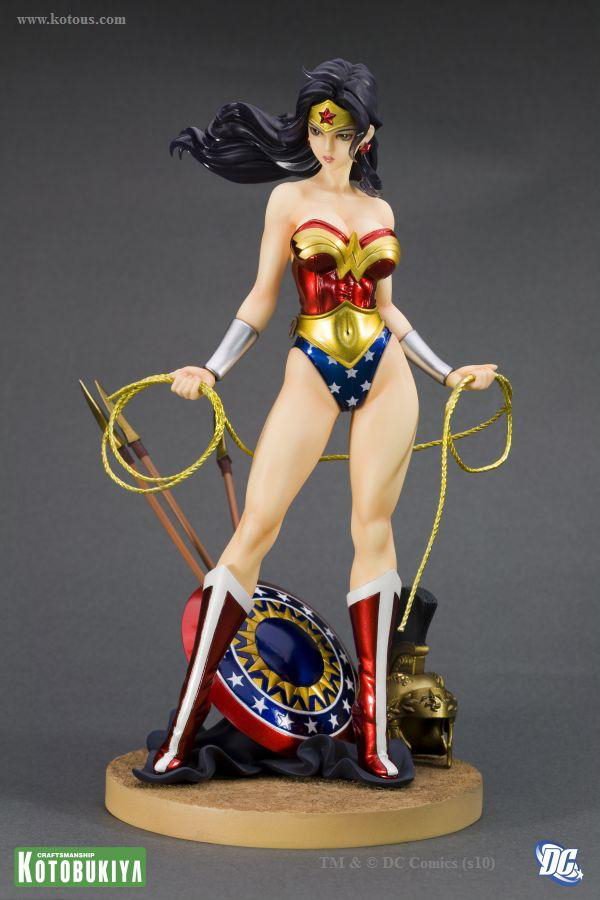 NOV101562
(A) Shunya Yamashita
A KOTOBUKIYA Japanese import! Celebrating this year's 75th Anniversary of DC Comics, the DC Comics Bishoujo Collection (combining DC's superheroines and villains with traditional Japanese stylings) continues with the prettiest member of DC's "Trinity" WONDER WOMAN!  Since her comic book debut in 1941, Princess Diana has been an icon of female power, intelligence, and grace.  Arriving in "man's world" from the Amazonian island home of Themyscira, Diana donned a red, white and blue costume to protect the world as Wonder Woman!  The timeless character appears for the first time in the Japanese bishoujo (pretty girl) style inspired by Japan's renowned illustrator Shunya Yamashita.
Joining the Gotham City duo of Batgirl and Catwoman in the DC Comics Bishoujo Collection, Wonder Woman is truly a force to be reckoned with.  The every-dynamic Amazon stands surrounded by her full panoply of weapons and equipment, ready to face any threat.  Dressed in her iconic and colorful costume, the muscular and buxom Wonder Woman shows plenty of skin and looks sexier than ever!  Diana holds her magical Lasso of Truth in both hands, ready to capture you and force you to tell her all your secrets.  As with her compatriots, Wonder Woman has an incredible Bishoujo-styled face which is framed perfectly by her flowing long black hair and tiara.
Wonder Woman is constructed of high-quality pvc plastic and stands just over 9 inches tall (in the magnificent 1/7 scale) atop an exclusive Amazonian base complete with her spears, shield, cape, and helmet!  No Bishoujo collection will be complete without her.
NOV101562 - DC WONDER WOMAN BISHOUJO STATUE - 3,540 ordered, 0 available