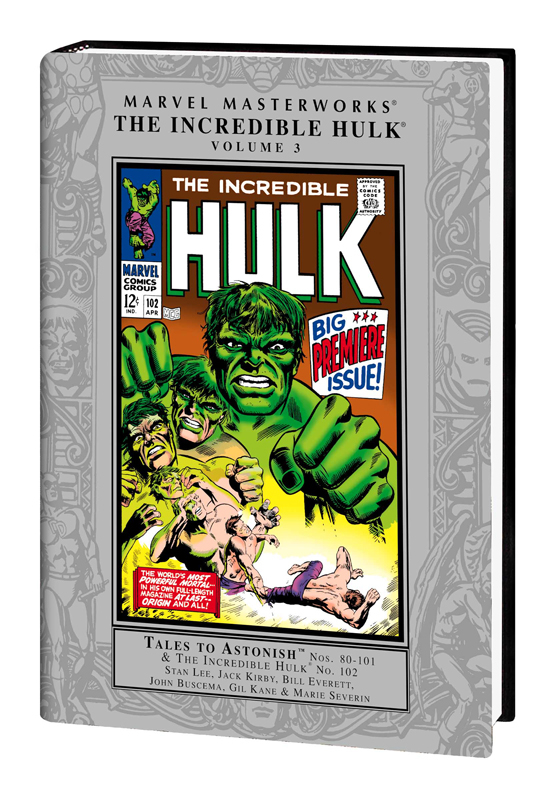 NOV052018
(W) Stan Lee, Gary Friedrich (A) Jack Kirby, Bill Everett, John Buscema, Gil Kane, Marie Severin, John Tartaglione, Mike Esposito, Herb Trimpe, Dan Adkins, George Tuska
Written by STAN LEE & GARY FRIEDRICH
Penciled by JACK KIRBY, BILL EVERETT, JOHN BUSCEMA, GIL KANE & MARIE SEVERIN
Cover by MARIE SEVERIN
Brace yourself, True Believer, Hulk is smashing his way into another marvelous monster-sized Masterworks! The batty bullpen declareth that you'd better hide behind a Hulk-Buster because it's not a happy Hulk who faces off against the likes of bombastic Boomerang, the android Hulk-Killer and the one and only Abomination in his classic first appearance by Stan "The Man" and Gil Kane! That's only the warm up, though! The cosmos itself shudders when the strongest man-like being in the Marvel U. goes toe-to-toe with the Silver Surfer, Prince Namor and the Mighty Thor himself!
Grab a crash helmet, bunker down and prepare yourself to be Hulk-inued this January!
Collecting TALES TO ASTONISH #80-101 and INCREDIBLE HULK (Vol. 2) #102