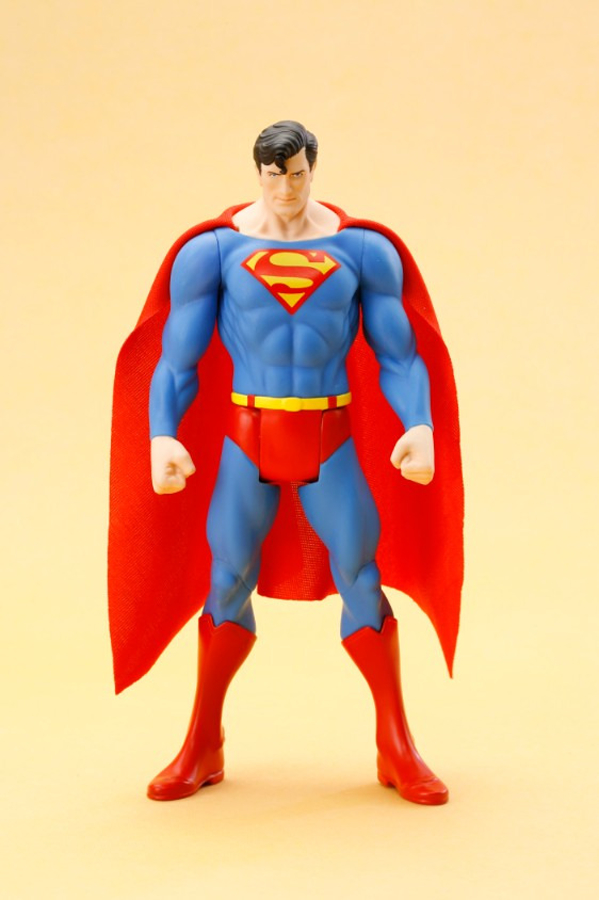 MAR152214
A KOTOBUKIYA Japanese import!  It's a bird, it's a plane...  The Man of Steel is back to headline a brand new non-articulated DC Comics ARTFX+ statue series from Kotobukiya based on vintage action figure sculpts enlarged to 1/10th scale.  You've seen him in his For Tomorrow and New 52 versions recently, and now the most famous superhero of all time appears as SUPERMAN CLASSIC COSTUME!
Return to the great action figures of yesteryear with this vintage-inspired Superman resembling a classic five points-of-articulation toy!  Of course, along with the new scale Clark Kent has received a massive upgrade in quality with an incredible sculpt and paint applications.  Like all ARTFX+ statues Superman is intricately detailed with powerful muscles, a great traditional facial portrait, and the unique elements of his classic costume including boots and belt.  Similarly the superhero pops visually with bright colors, the blue, red, and yellow of his costume drawing your eye.  Superman even comes with some great special features like an alternate arm part to recreate the classic "power action" move and a real cloth cape.
Sculpted by Atelier Bamboo, Superman Classic Costume ARTFX+ stands just under 8 inches tall (1/10th scale) on his included magnetic display base with perfect stability.  As usual the Man of Steel leads the charge, looking awesome by himself in this presentation and bringing after him other classic style ARTFX+ statues coming soon like Green Lantern and the Flash!
In Shops: Jan 13, 2016
SRP: $29.99