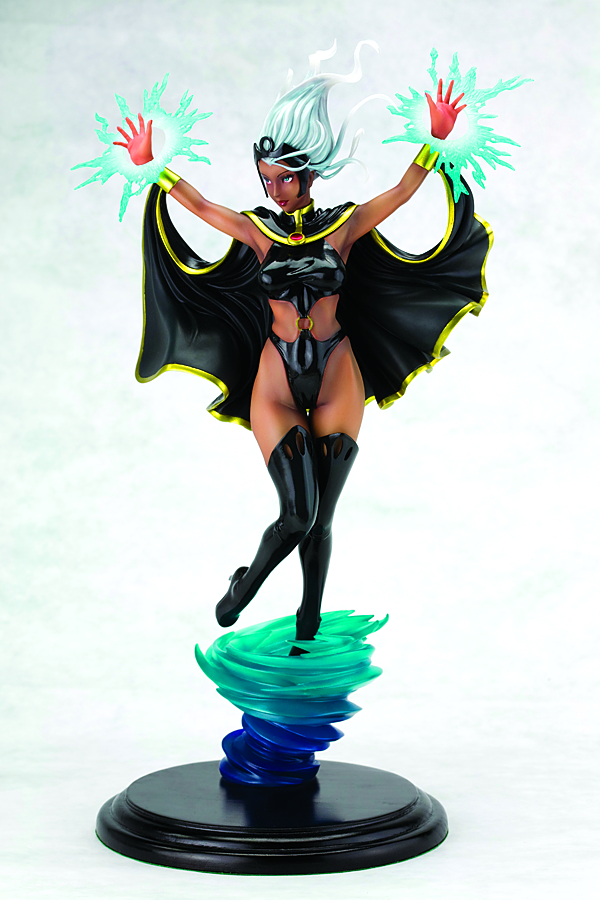 JAN121846
(A) Shunya Yamashita
A KOTOBUKIYA Japanese import! The popular Marvel Bishoujo collection (combining iconic superheroines and villains with traditional Japanese stylings) continues to bring you the amazing beauties of the Marvel Comics universe as you've never seen them before.  Following hot on the heels of X-23 is another beautiful and powerful mutant, the goddess STORM!  A native of Africa known as Ororo Munroe, the Marvel "weather witch" first appeared in 1975's Giant-Size X-Men #1.  In addition to her prodigious meteorological powers, Storm has exhibited a great talent for leadership which she has put into good use as a frequent leader of X-Men teams over the years.  After appearing in nearly all of the X-Men movies, comic books, cartoons, and video games over the years, it's her turn to be treated to the Japanese Bishoujo (pretty girl) style based on an original character reinterpretation by renowned illustrator Shunya Yamashita.
A master of the elements, Storm flies into your collection with all the fury of her namesake and the beauty of nature unleashed.  Hovering atop a whirlwind base made of clear pvc, the sultry mutant poses with one leg bent in front of the other and her hands raised to the heavens.  Ororo's outfit is based on the original black costume designed by David Cockrum and looks great on the superhero, leaving plenty of skin exposed and showing off her voluptuous body.  The intricate details of her clothing and streaming hair reflect the expertise of the sculpt, and it's all topped off by a beautiful Bishoujo styled face that makes this Storm different from any other version in your collection.  And if all of that wasn't cool enough, the X-Woman even comes with removable lightning effects that you can mount on her hands!
Sculpted by Koutarou Takeuchi, Storm stands nearly 12 inches tall (in the Marvel Bishoujo 1/7th scale) as she floats in the air, a true vision of comic book beauty viewed through the lens of the bishoujo style.