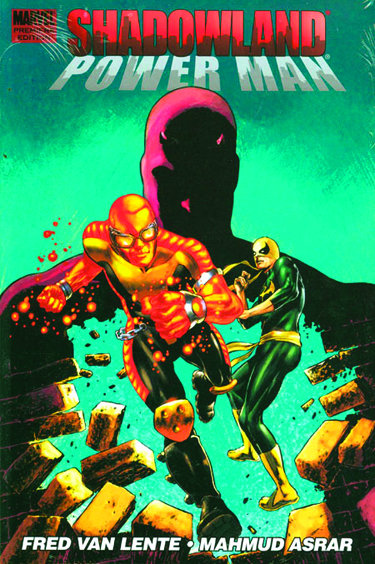 JAN110836
(A) Mahmud A. Asrar (CA) Mike Perkins
Written by FRED VAN LENTE
Penciled by MAHMUD ASRAR
Cover by MIKE PERKINS
Exploding out of the blood-strewn streets of Shadowland: the all-new, all-different Power Man! Who is he? Why is he one of the few heroes to oppose Daredevil's rule over Hell's Kitchen? And what is his connection to Daniel Rand's School of Thunder dojo - and the killer called Bullseye? That's what Luke Cage and Iron Fist must discover, before the vengeful swords of the Hand find this young mystery man first! It's all-out martial arts action as Fred Van Lente (MARVEL ZOMBIES 3-5) and Mahmud Asrar (SIEGE: YOUNG AVENGERS) introduce a new star with a host of secrets! Collecting SHADOWLAND: POWER MAN #1-4 and material from X-MEN: CURSE OF THE MUTANTS SPOTLIGHT.
112 PGS./Rated T+