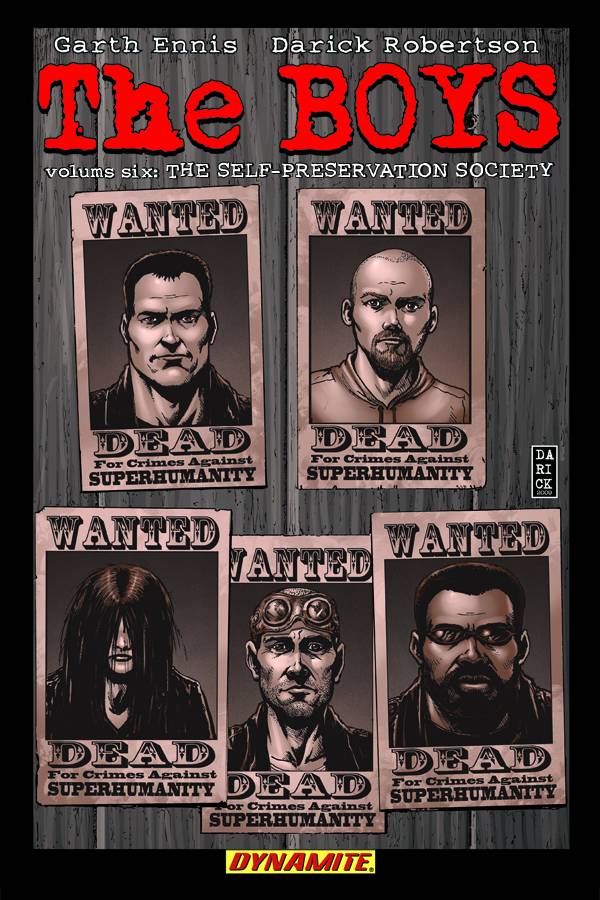 #
JAN100870
(W) Garth Ennis (A) Keith Burns, John McCrea, John McRea (A/CA) Carlos Ezquerra, Darick Robertson
The sixth Dynamite collection of Garth Ennis and Darick Robertson's The Boys is here, with The Boys, Vol. 6: Self-Preservation Society! You can only maim and murder so many superheroes before someone decides to do something about it, and in The Boys' case that means Payback - a superteam of unimaginable power, second only to the mighty Seven. Pulping teenage supes is one thing, but how will our heroes fare against Soldier Boy, Mind-Droid, Swatto, the Crimson Countess, and the Nazi juggernaut known as Stormfront? Blood flies and bones shatter, as Butcher and company meet fire with fire. And in the origin tales of Mother's Milk, the Frenchman and the Female, Hughie learns of the strange paths by which this disparate trio came to join The Boys. From tragedy in Harlem to the slaughter on the Brooklyn Bridge, from the festival of Les Saints De Haw-Haw to the horror lurking under Tokyo, this is a journey of discovery like no other - with only the flickering lamp of insanity to light the way. The Boys, Vol. 6: Self-Preservation Society collects issues 31-38 of the New York Times Best-Selling series by Garth Ennis, Darick Robertson and Judge Dredd co-creator, Carlos Ezquerra, and features all of the covers by Robertson!
In Shops: Mar 31, 2010
SRP: $19.99
View All Items In This Series
ORDER WISH LIST