DEC188143
From Beast Kingdom. Beast Kingdom warmly presents the first in the range of highly realistic Disney characters, continuing the Dynamic 8ction Heroes line of highly detailed figures. The DAH-016: Toy Story Woody action figure is a fully articulable Toy Story 3 re-creation of the warm-hearted cowboy! As Andy's favorite toy, Woody still bears his owners signature on the base of his articulable foot, making this 8inch action figure a real keepsake! Woody is always up to mischief however, so with 20 points of articulation and a replaceable Cowboy hat as well as pointy gunshot hands, he is able to quickly tell his foes to reach for the sky! Speaking of mischief, Woody's three replaceable faces, including one special version bearing a surprisingly cheeky grin, means collectors can have him ready for any fun day out with the Toy Story gang, including his best friend and ally Buzz! So don't miss you chance at getting this DAH Woody as well as the Space Ranger Buzz, the dynamic duo out to save all collectors' days and hearts! 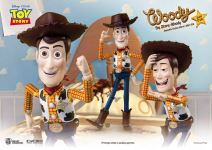 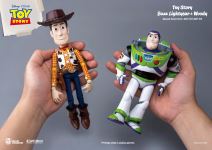