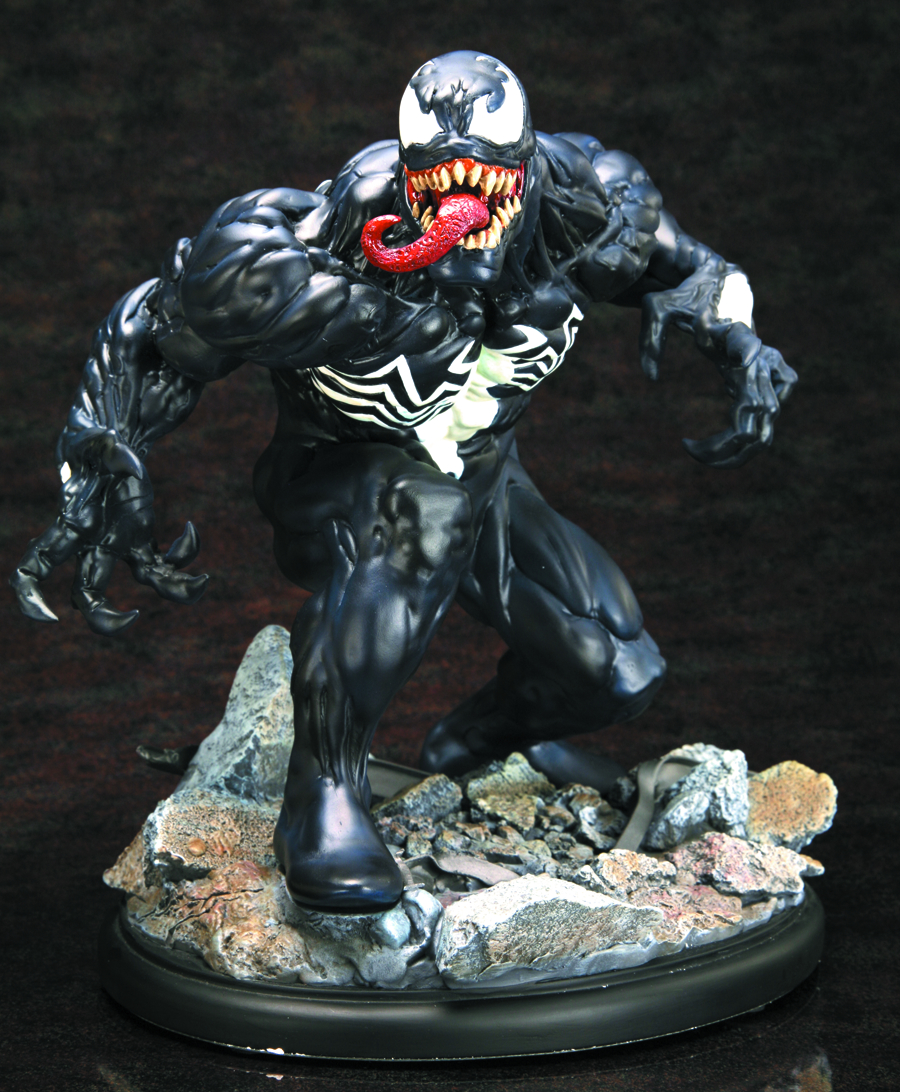 DEC121703
A KOTOBUKIYA Japanese import!  Marvel revolutionized comic book storytelling in 1984 with the iconic "Secret Wars."  During the epic battles between the universe's most popular heroes and villains a seemingly small event occurred that would change the course of Peter Parker's life (and the lives of those around him) forever; his original blue and red costume was damaged.  On the alien planet he subsequently found a gooey black substance that flowed over his body, creating a black and white costume that seemed too good to be true.  A few months later, it was revealed that the substance was actually an alien parasite!  After Spider-Man rejected it the parasite joined with Eddie Brock to become a monstrous villain that would go on to become one of Marvel's most popular characters, appearing in countless comic books and the film Spider-Man 3.  Now, he returns in a brand new Fine Art Statue to take on his nemesis Amazing Spider-Man as VENOM UNBOUND!

Crouched low like a viper poised to strike, the evil Venom willingly gives up the high ground to web-head.  Brock and the Symbiote are in perfect sync, taunting their prey and patiently waiting to get it in their deadly grasp.  Venom is massively muscled, with an intricately sculpted alien physiology that shows how the symbiote can shift forms and make itself look imposing.  Leaning forward on his right leg, the monster bends at the waist with its arms out to its sides and wicked clawed fingers opened wide as it flings webs with the smashed concrete street flying around it.  Venom wears his trademark smile, a huge skull-splitting grin exposing frightening teeth while the creature's shockingly long tongue snakes out of its mouth and curls in the air.  The symbiote is black with bright white spider markings on its chest and back, squares on the back of its hands, and its enormous eyes; meanwhile, Venom's creepy brownish teeth contrast nicely with its dark red, wet-looking tongue!

Painstakingly sculpted by Erick Sosa, Venom Unbound stands nearly 10 inches tall in magnificent 1/6 scale.  While Brock and the symbiote make for a great display on their own, this statue's base and pose are specially designed to create an integrated battle scene with the previously released Amazing Spider-Man Unleashed Fine Art Statue from Kotobukiya!