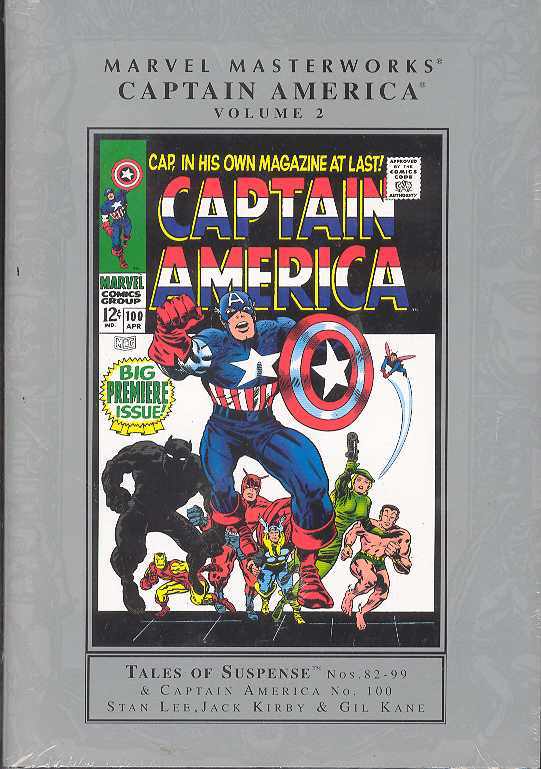 APR051960
(W) Stan Lee (A) Jack Kirby (A/CA) Jim Steranko
Written by STAN LEE & ROY THOMAS
Penciled by JACK KIRBY, GIL KANE & JACK SPARLING
Cover by JACK KIRBY
Who loves seconds? We love seconds-a second sensational serving of the Sentinel of Liberty! Yes, that's right, the Mighty Minions of Marvel are chipping the next Cap Masterworks free from its icy fifteen-year slumber and you're invited to the homecoming party. So strap on your shield and prepare for a barrage of Stan and Jack's best as Cap (with a little help from his friends, the Avengers) battles a bevy of baddies like the strange Super-Adaptoid-the super-powered robot with the combined powers of the Avengers. And if an android passing himself off as Cap was as odious as you thought, the Red Skull tries to convince the people of America that Cap's turned traitor. Yikes! Don't crawl into your fallout shelter in shame, though. Our boy will bounce back to take on a hearty helping of that horrendous head, M.O.D.O.K.., in his first-ever appearance, before taking it home in a scintillating struggle against Baron Zemo, guest-starring Nick Fury, the Black Panther and Cap's super-spy gal, Sharon Carter! Reserve your star-spangled copy today! Collecting TALES OF SUSPENSE #82-99 and CAPTAIN AMERICA (VOL. 1) #100