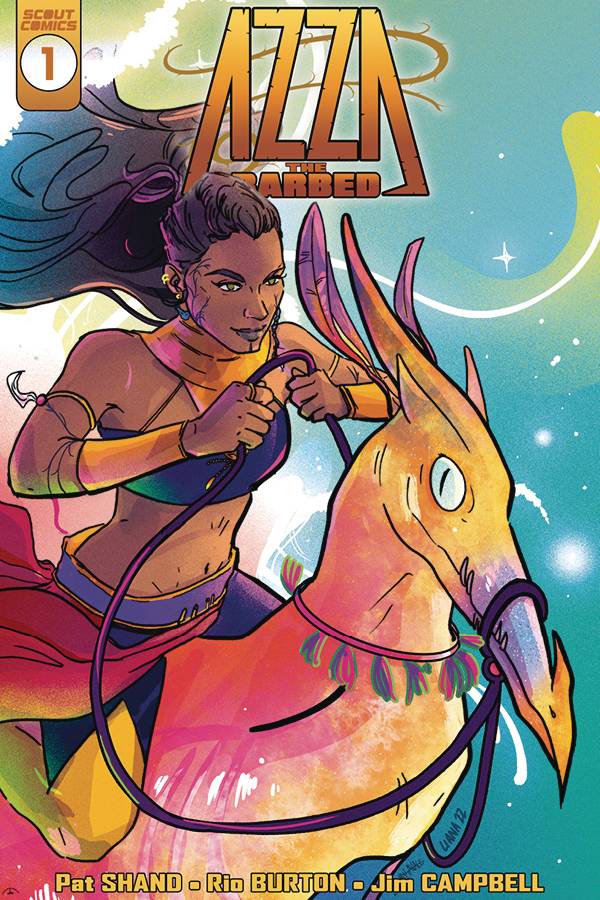 #
JUL221889
(W) Pat Shand (A) Rio Burton (CA) Liana Kangas
WRITER PAT SHAND (Destiny NY, Snap Flash Hustle) AND ARTIST RIO BURTON
(Branches Entwined & Broken) LAUNCH A NEW FANTASY EPIC!
Azza was born into a family that, for generations, served in the Obsidian Guard, a military unit of holy warriors. During Azza's Coronation, a magical ceremony that would imbue her with a holy glowing power, something went wrong. Instead of the sacred Obsidian tattoos, she became marred with thorned, black markings. Thinking this a bad omen, Azza's people banished her. Now, Azza lives in solitude guarding a great evil... but when that evil escapes and begins to
spread its wicked power, Azza must make a choice: save the people that expelled her or allow
her home town to fall to evil.
With an emotional, comedic, and awe-inspiring story of empowerment, Azza the Barbed blends
fantasy, adventure, mythology, horror, and action in this unforgettable new series.

Retailer Incentives: Retailers purchasing ten copies of Cover A (1:10) of AZZA THE BARBED #1 can unlock unlimited copies of Cover B by LIANA KANGAS. Please reach out to your CS rep with questions about retailer incentives.
In Shops: Oct 12, 2022
SRP: $4.99
View All Items In This Series
ORDER SUBSCRIBE WISH LIST