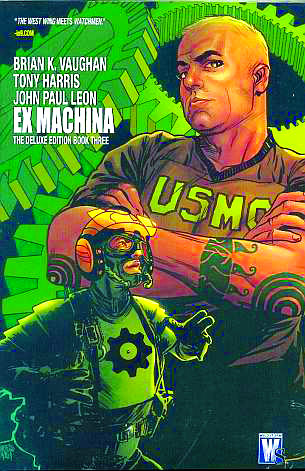 JAN100331
(W) Brian K. Vaughan (A) Various (CA) Tony Harris
Written by BRIAN K. VAUGHAN
Art by TONY HARRIS, JOHN PAUL LEON & others
Cover by TONY HARRIS
In this Deluxe hardcover collecting EX MACHINA #21-29, EX MACHINA: INSIDE THE MACHINE and the EX MACHINA SPECIAL #3, Mayor Mitchell Hundred faces difficult decisions regarding New York City's drug laws. But will a string of brazen, violent robberies and a shocking suicide affect the the Mayor's policy? And in a second story set during the New York blackout of 2003, the mayor must deal with a city gone dark.