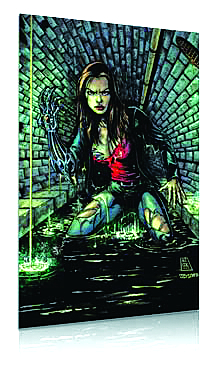 "Pantheon" Part 2 of 3, Guest-starring Aphrodite IV!
The android assassin Aphrodite IV is back in town and Sara's confrontation with the cold-blooded killer will force her to face her own actions during "War of the Witchblades."
Featuring a cover by series artist Sejic and a variant cover by Darick Robertson (The Boys)!