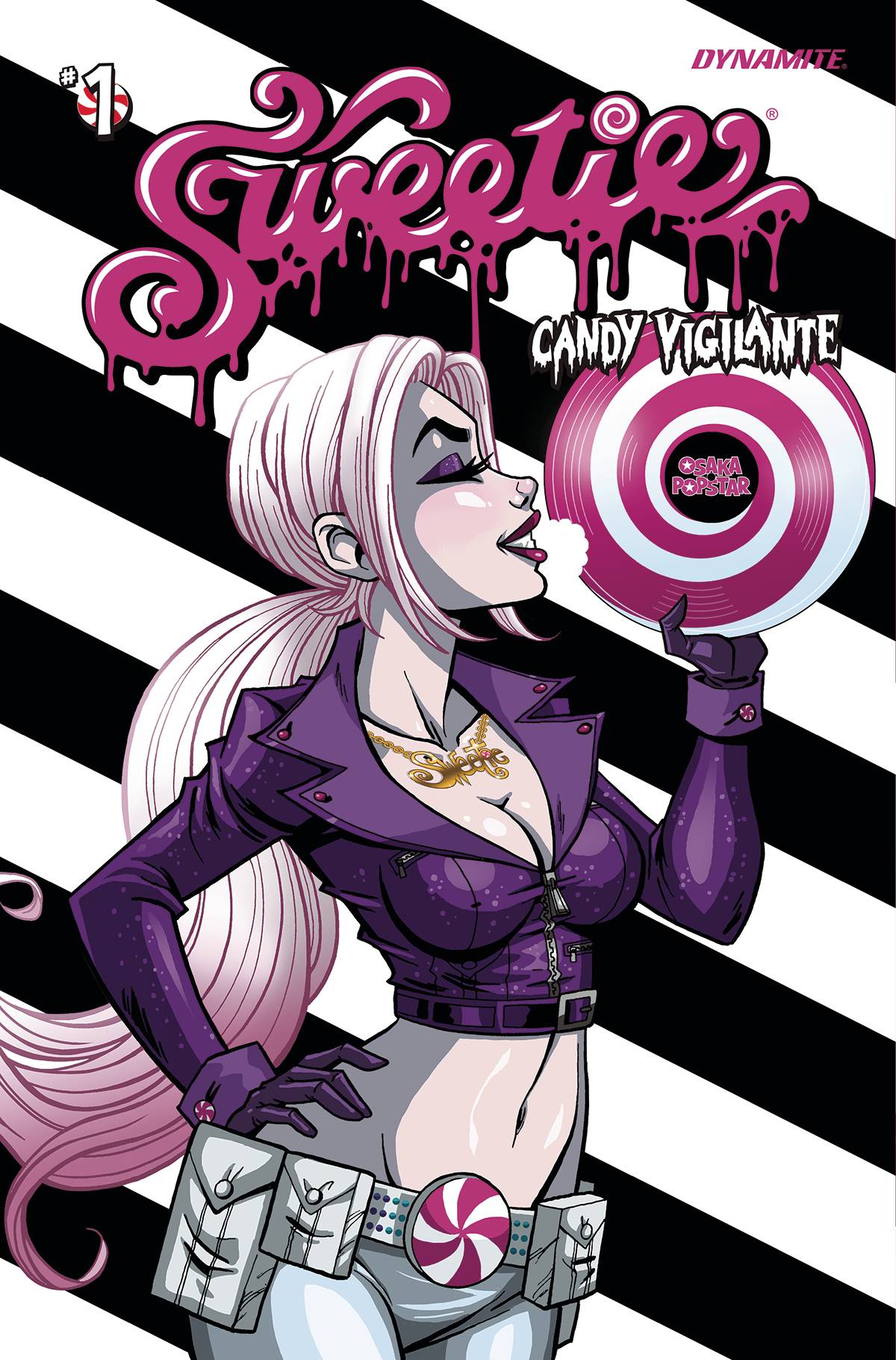 #
AUG220558
(W) Suzanne Cafiero (A) Jeff Zornow (CA) Josh Howard
IT'S SUGAR, ICE AND YOU BETTA' BE NICE! Sweetie Candy Vigilante is a honey-dipped, dark-humor infused horror/fantasy that tells the tale of Sweetie, an ethereal, beautiful, charming, well-meaning (yet unquestionably unhinged) blood relative of the mythological "candy man"...you know, the dude that takes the sunrise and sprinkles it with dew? Yeah - that guy. Dismayed by the blight and decay of her community, Sweetie is hell-bent on enacting a blood-caked, sugar-coated manifesto on society by utilizing her other-worldly powers and proprietary family secrets in her quest to make the world a "sweeter" place. She's starting brick-by-brick in her hometown, New York City.
In issue #1, on a snowy, icy night, Sweetie pays a visit to a NYC landmark sweet shop known as the Ice Cream Bunny, hoping to find its namesake at the helm. To her dismay, she finds the shop transformed from its once sugary splendor to a salty den of iniquity. The once-beloved store is now a front for a notorious crime syndicate, and they're not very nice at all. Sweetie uses her captivating persona and unassuming confectionary weapons to tear the place, and its gang of thugs, limb from limb - as the first step to restoring its former glory. All the while enjoying a dynamic punk rendering of the Archies' pop classic "Sugar, Sugar" on the jukebox, as heads roll - literally.
This issue includes a download code for a free pop-rockin' MP3 of "Sugar, Sugar," performed by Osaka Popstar (as featured in the issue) so you can listen along while Sweetie kicks butt! Will Sweetie find any good eggs among the clientele of the Ice Cream Bunny? Who exactly is the Ice Cream Bunny? Who is Sweetie's oversized Gummee hench-bear? This issue has it all: Blood, guts, and a sugar rush! It's all going down in the debut issue of "Sweetie Candy Vigilante." Isn't that nice?
Sweetie Candy Vigilante kicks off with an extra-sized Dynamite Debut issue to get you hungry for more! So buckle up gum-drop, and make sure you save room for dessert, because, it's not like a little sugar is going to KILL you, RIGHT?
Osaka Popstar is the pop-punk multimedia music and art project led by singer/producer John Cafiero, longtime Misfits and Ramones collaborator and platinum selling film and video director. The critically acclaimed debut album "Osaka Popstar and the American Legends of Punk" featuring frontman Cafiero with a revolving lineup of punk-rock legends as his backing band including members of the Misfits, the Ramones, Black Flag, the Voidoids, and more. Sweetie made her debut appearance on the cover of Osaka Popstar's latest release "Ear Candy", which has been featured on CNN and debuted at #7 on the top 10 SubModern Album chart.
In Shops: Oct 05, 2022
SRP: $3.99
View All Items In This Series
PREORDER SUBSCRIBE WISH LIST