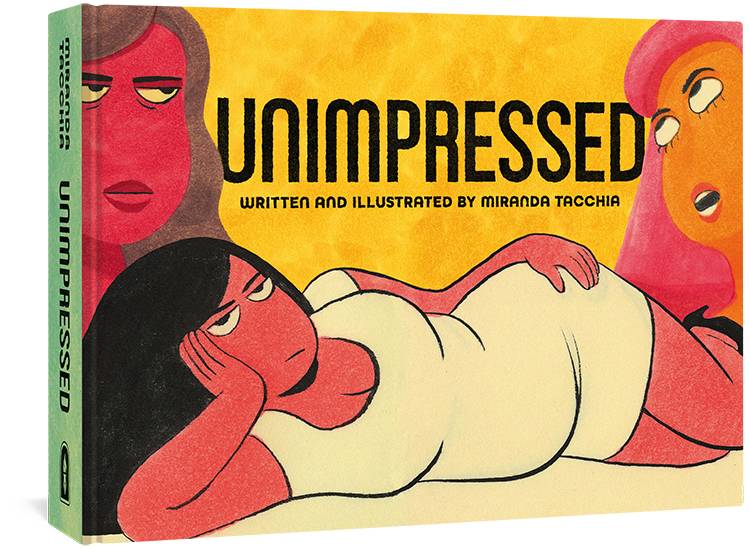 #
AUG211770
(W) Miranda Tacchia (A) Miranda Tacchia
As seen on her popular Instagram account (@mrmtacchia), Southern Californian cartoonist and animator Miranda Tacchia's first book collects more than two hundred hilarious one-liners (and even funnier drawings) tackling modern friendship, romance, urban living, and self-image.
Have you ever schemed with a friend? Stared at your phone screen well after you should have gone to sleep? Braced for heartbreak? Been told to smile more? Then Unimpressed will undoubtedly speak to you. In a book that bridges comics and memes, Tacchia uses her biting sense of humor and background in animation to create brilliant character portraits of women with only markers, Post-it notes, and tape. A master of expression, figure, and subtle (and other times not-so-subtle) comedy, Tacchia's protagonists are usually "unimpressed women" - who all share the fact that "they don't give a shit about you," as Tacchia puts it.
What makes Unimpressed so impressive and entertaining is how Tacchia taps into instantly relatable feelings and situations while simultaneously creating art that exudes confidence and vulnerability. (Sample caption: "When you went from giving him an earful to a mouthful.") Her often scabrous depiction of life as a young single woman today echoes that of Phoebe Waller-Bridge's (Fleabag) or Abbi Jacobsen and Ilana Glazer's (Broad City). Funny, smart, observant, sexy, gross, and relatable - Unimpressed is a wonderful debut and a great gift idea.
In Shops: Oct 20, 2021
SRP: $29.99
ORDER WISH LIST