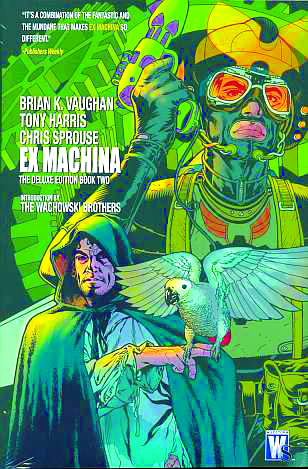 AUG090204
(W) Brian K. Vaughan (A) Various (CA) Tony Harris
Written by Brian K. Vaughan
Art by Tony Harris & Tom Feister and
Chris Sprouse & Karl Story
Cover by Tony Harris
In this new, deluxe volume collecting issues #12-20 of the hit series along with EX MACHINA SPECIAL #1-2, Mayor Mitchell Hundred must make a difficult decision about his own future, becomes part of a shocking trial complicated by the unexpected arrival of an all-new Super Hero, and leaves New York City for the first time since his election to embark on a strange adventure. Plus, shocking tragedy strikes an Iraq War protest in downtown Manhattan.
Advance-solicited; on sale December 2 o 272 pg, FC, $29.99 US o MATURE READERS